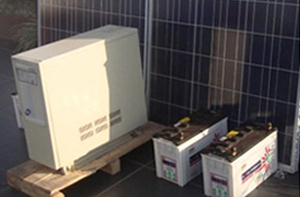 Inverter is a type of electronic power generator which convert low volatge direct current(DC) from a battery to a high voltage alternating current(AC).Power failures can be really very frustating at times,especially during the night time.Inverters will help you to cope up with the balckout and do away with your problems. Choosing a right inverter and battery is not very easy.

Load Calculation: First of all calculate your Power Consumption. This can be done by adding up the Watts(W) of all loads(CFLs,TV..), to be powered by the inverter. For example one 20W CFL + one 60W TV =20+60 =80W. Inverter Capacity: Nexr select the Volt-Ampere(VA) rating of Inverter. VA=WattsxPower Factor.Power factor value varies from 0.6 to 0.8.Note that a 600VA rated inverter (with power factor 0.8) delivers approximately 480 Watts only!

Inverter Type: Square wave,Quasi- Sine wave and Pure Sine wave inverters are now available.In practice,sine wave is the correct waveform on which all electronic equipment, including televisions and computers are designed to run.

Battery Selection: Battery is the back bone of any inverter.Usually 12V battery is used with home inverters.Tubular type storage batteries are recommended for inverters because they are capable of long hours of guaranteed backup time.Backup time is simply the number of hours for which an inverter will be able to run the output electric load during power failure.Batteries are available in different volatge and Ampere-Hour (Ah) ratings. Backuptime is mainly determined by this Ah rating of the battery. Tubular batteries have higher capacity-to-size ratio. These types can be recharged faster and are energised to deliver incresed power and and higher efficiency.

Backup Time:ry,PF stands for the power factor of the inverter and load is the sum of VA ratings of the electrical loads connected to the inverter.

Quick Selection: 800VA sinewave inverter with a 130 Ah tubular battery for a maximum backup of near 3 hours @600Watts.

Warning: Before taking any action based upon advice and/or information contained in this article, you should carefully consider the advice and information and consider obtaining relevant independent advice.

You must be having a hard time and may be even trying to get an inverter. But must be confused which inverter and battery to choose. Some may have bought them already but presently may not be sufficient to provide electric backup. So, I suggest you do some homework before buying or upgrading the inverter/battery.

Thumb rule is that you select inverter based on the power required and battery based on the backup time required.

Selecting Inverter: Inverter rating (VA) must be greater than the total power required by the devices to be operated via inverter. So, first of all sum up the powers of all those devices. I have listed the power consumption value for some equipments below.

After getting total powers in watt, you need to convert that to corresponding VA value; to compare with the inverter rating. conversion from watt to VA can be done using the equation below.

Selecting Battery: For the battery selection the equation below summarizes all the points.

We already have the Required VA as calulated from the total power required. Now we have to figure out ourselves the backup time required and decide to use 12 V or 24 V battery. Or we may combine batteries in series to sum up the voltage and get higher voltage.

After then we can calculate the AH rating and get a battery near that rating.