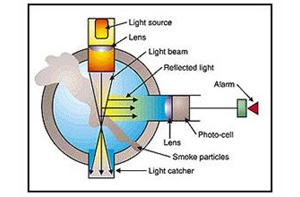 Most public places have a fire alarm system in place to warn people in case of an outbreak of fire, and to take quick steps in preventing its spread. However, these are simply gadgets, and people should be aware of how they work.

A fire alarm system is a device, or a series of devices that functions to alert people in the wake of a fire in the building. Whatever form the fire alarm system may be, the underlying principle is the same. They contain the same components that eventually warn against a fire hazard.


Components of a Fire Alarm System

Working of a Fire Alarm System

This is Quite simply, it involves the fire detecting device being tripped, for example, a smoke alarm could detect smoke and send a signal to the system, or a person could notice a fire and pull the lever that informs the system of a potential fire. In both cases, an alarm that is too shrill to be ignored rings, alerting people of the fire, so that they may quickly vacate the premises. Almost all fire alarm systems have smoke detectors installed on them, or at a different location. Smoke detectors come in two kinds – ones that contain optical sensors, and ones that contain ionization sensors. 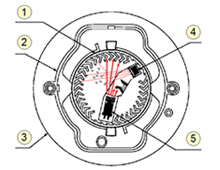 This detector needs to be screwed to the ceiling since that's where the smoke rises towards. The smoke detector has a large opening at the bottom which leads to a detection chamber. An infrared light beam emitted by an LED (light-emitting diode), invisible to the eye, darts across this chamber towards a photocell. This photocell generates electricity as long as the light falls on it. In the absence of smoke, there is constant light between the LED and detector, creating a circuit that remains unbroken. However, when smoke enters the chamber and causes a break in the beam, the photocell stops producing electricity because light doesn't fall on it anymore. There is a break in the circuit, which triggers the alarm which alerts you to the presence of smoke and a possible fire.

This is more common, being less expensive than the optical smoke detector.Here, inside the detector, an ionization chamber is present, which opens to the air filled with ions, in this case, atoms that are positively charged nuclei due to loss of electrons. These ions come from a chemical element named americium that constantly emits alpha particles, tiny radioactive particles that leak into the detection chamber. When they enter the chamber, they collide with air molecules, converting them into positively charged ions and negatively charged electrons. These move in opposite directions between two electrodes. Hence, so long as there is movement of these particles between the electrodes, a current flows between the electrodes.When a fire breaks out, the smoke enters the detector and clogs the ionization chamber. This results in the shutting off of the electrical current, which causes the alarm to sound.

Fire alarm systems may also have heat sensors. As the name indicates, in the incidence of a fire, the temperature rise causes activation of heat sensors that in turn causes the fire alarm to ring. This is how a fire alarm system works, making sure people are warned of a possible or real fire, so that quick, effective measures may be taken for their safe departure from the area, and for doing all they can to prevent as much loss of property in the area as well.